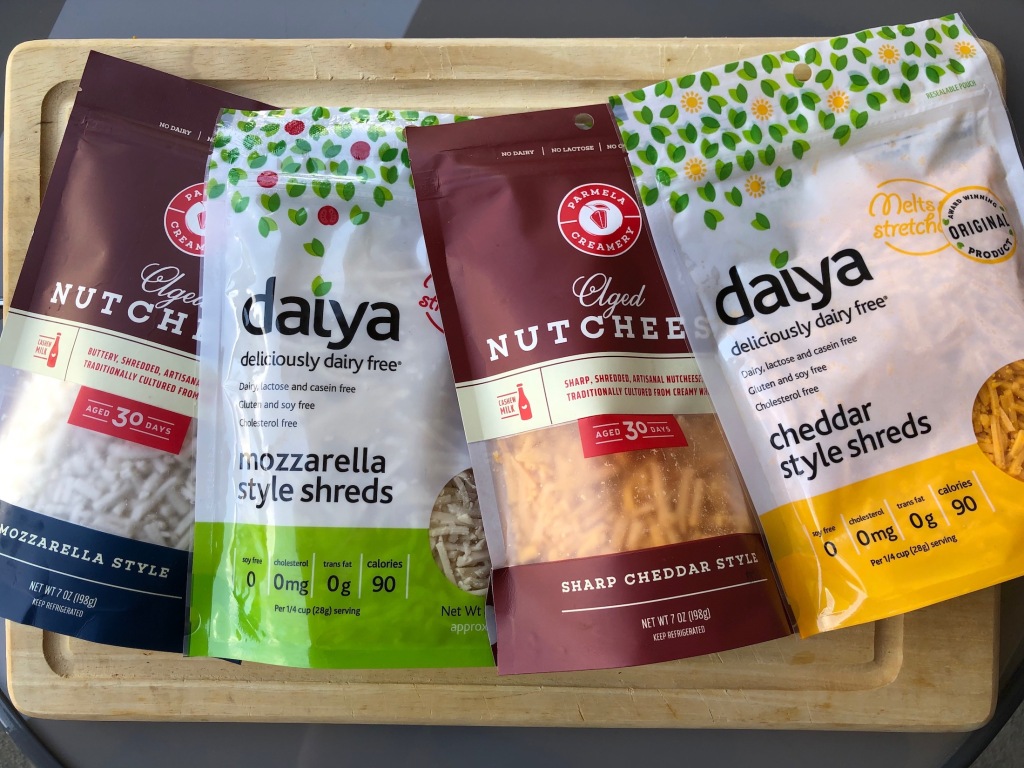 Every week on my podcast, we devote time to tasting new vegan products. This week, however, we decided to do something different. We took the two leading brands making vegan mozzarella and cheddar shreds – Daiya and Parmela – and decided to put their products to the test.

In terms of ingredients, the major difference between the two is that Daiya is tapioca-based, while Parmela is made from cashews and aged before shredding. These cheeses are mainly meant to be used in recipes like pizza, nachos, etc., so we tasted them both melted and fresh out of the bag. Who came out on top? Keep reading.

We decided to start with mozzarella since it’s the lighter of the two cheeses. Out of the bag, Daiya has that familiar Daiya taste we’ve all come to know – some people love it, some are not so keen. These shreds are mild, with a hint of saltiness, that’s about it. Parmela’s are shredded a little thicker – also salty, with a pleasant mild cheesy flavor.

When melted, the two cheeses perform very differently. Daiya has a real stretch similar to dairy-based cheese that makes it perfect for pizza. Parmela’s melts but has no stretch. This would work excellent in a vegan chicken parmigiana or mixed in with pasta for an easy blush sauce. Both cheeses are really mild so I could see using these interchangeably depending on the recipe and how stretchy you wanted to the cheese to be. Unless you don’t like the taste of Daiya, then Parmela would be the way to go. But my husband loves the taste of Daiya, so those people are out there as well. In fact, he’s so love with it that he often makes what he calls “fondue marinara,” tomato sauce with a shit-ton of Daiya melted in.

On the cheddar front, out of the bag Daiya didn’t taste that much different than the mozzarella, to be honest. The Parmela, however, definitely stood out due to its distinct aged aroma and taste. It’s very impressive even just eaten straight out of the bag.

When we melted these, Daiya had that amazing stretch again, and the cheddar flavor actually came through much more prominent and quite delicious– this would be fantastic on nachos or in a burrito. But the Parmela – wow! First of all, melting it literally made our whole house smell like aged cheddar – I’m not kidding. And the flavor? Dayyum! It’s a shame Parmela doesn’t stretch like Daiya, but it would make for an insane mac and cheese or to use in a sandwich. Also, just because you put Daiya cheese on the nachos for the stretch doesn’t mean you couldn’t throw Parmela on there too for some added flavor.

This is tough! I have a great loyalty to Daiya since they were the first real breakthrough in vegan cheese a decade or so ago. Longtime vegans, you know what I’m talking about. There was almost NOTHING on the market back then – and what was on the market was kinda horrifying. Daiya was a revelation when it arrived. And to my husband, it still is!

That said, in terms of sheer flavor – especially with regards to the cheddar – I have to go with Parmela. It’s superior and doesn’t have the sometimes-polarizing Daiya taste. But if you’re looking for stretchy, gooey cheese, Daiya should be your go-to. Another important note: People who have nut allergies should choose Daiya since Parmela is made from cashews.