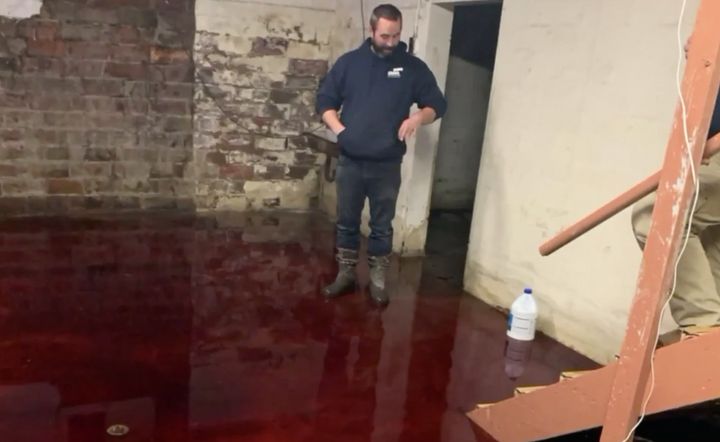 Get ready to be sick. An Iowa family had to temporarily relocate when they discovered the basement of their home had been flooded with five inches of animal blood and tissue. The Lestina family’s house neighbors a meat storage facility, where blood, fat, and other viscera from slaughtered animals are routinely washed down the drain. Apparently, some sort of pipe blockage or breakage caused the waste to be forced through the Lestina’s basement drain.

While this story might seem like a one-off horrific event, the truth is that animal waste from factory farms is actually a serious problem that affects many communities.

Because animals exploited for food are bred and killed by the billions each year, the waste produced by these animals (feces, urine, blood, etc.) dwarfs that of the human population. Some might recall this shocking photo that went viral in 2013.

British photographer Mishka Henner was taking aerial photography of oil fields in Texas when he came across this waste lagoon near a cattle feedlot. The disturbing photograph forced people to come face to face with one of the sickening realities of modern farming – all that shit, piss, and blood.

The fact is that raising thousands or millions of animals on one industrial farm necessitates waste lagoons the size of football fields. These massive shit holes (literally) pollute local communities and public waterways, creating a health and environmental catastrophe.

Take this story from few years ago, where a factory farm in North Carolina that produced more than 15,000 Olympic pools worth of waste was caught misting it into the air, causing respiratory issues and an unbearable stench for nearby residents. Or how about this one from Illinois, where a hog factory farm leaked more than 200,000 gallons of waste into a creek and killed tens of thousands of fish. These accounts are not uncommon – just ask anyone who lives near a factory farm.

Even the CDC has warned the public about this issue, reporting that waste from factory farms can leak chemical, bacterial, and viral compounds into soil and water that may affect the health of people living in close proximity.

Additionally, the CDC has reported on the disastrous result of factory farm waste ending up in rivers and streams which can contaminate drinking water and wreak havoc on fish populations.

So, while the story of the Lestina’s basement may seem like an outlier, the problem caused by animal waste from America’s meat, dairy, and egg addiction is actually quite widespread and dire.