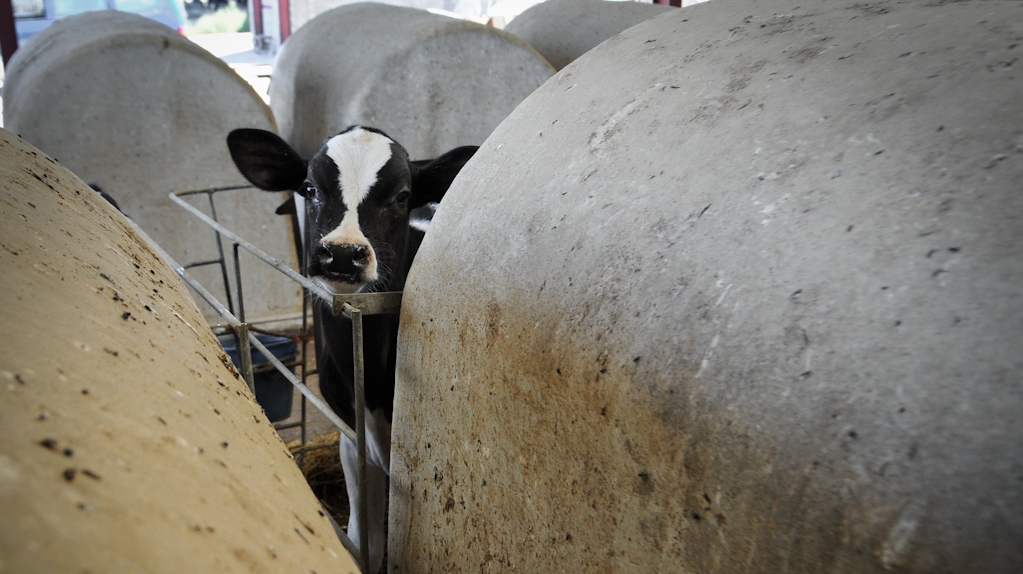 There’s a news story from 2013 I will never forget. Six years later, and I still think about it often. Concerned citizens in the town of Newbury, Massachusetts called the police after hearing “strange noises” coming from the local dairy farm.

When the police arrived, they were assured by the dairy farmer that the distressing sounds (which were coming from the animals) were totally normal and expected. The cows were crying out because they were lamenting the separation from their babies – something that happens routinely on dairy farms about once a year.

You see, the truth is cows produce milk for the same reason all mammals do: For their babies. And in order to produce milk, a cow must give birth.

Because milk is a dairy farmer’s commodity, a mother cow is not allowed to partake in the natural process of caring for and feeding her baby. Instead, baby calves are ripped away from mother cows within hours of being born so farmers can steal and sell their milk.

This forced separation obviously causes incredible stress to both the mother and baby. As described by the people of Newbury, cows have been known to cry out for weeks for their missing calves. I’ve also seen videos of cows running after their babies as they’re dragged away from them.

What happens to the calves? If she’s female, she will eventually be exploited for dairy just like her mom once she’s old enough to conceive. If he’s male, he will be sold for veal. He will be kept chained in a crate and slaughtered at just 18 weeks old.

A cow exploited by the dairy industry will be forcibly inseminated by the farmer, made pregnant, and give birth over and over again until her body gives out and is considered “spent.” This usually happens at around four or five years. At that point, she will be sent to slaughter and her meat will most likely be sold as ground beef. A cow’s natural life span is 25 years.

Since cows are kept continuously pregnant, there have been many accounts of pregnant cows being sent to slaughter and actually going into labor on the slaughterhouse floor. Could you even imagine a scene more hellish than a mother trying to protect her baby when she’s about to be killed? It haunts me.

Now I know that many take issue whenever you compare human and non-human animals. But there if there’s one thing humans cannot claim for themselves it’s the mother-child bond. We see this in our own families, but we also see this in nature. It’s instinctual. And even if you believed a mother cow felt only half of what a human mother feels for her baby, can you still imagine the torment and anguish dairy farming causes?

When I first learned about the routine practice of separating babies from their mothers in the dairy industry, I was heartbroken. I’ve read a lot about animal exploitation since becoming an activist over a decade ago and it’s all horrible, but this really shook me. The despair we inflict on mother cows and their babies is truly unimaginable.

Thankfully, dairy consumption in the U.S. is declining. In fact, The Dairy Farmers of America recently reported that sales plummeted by $1.1 billion for 2018. We can only hope this will correspond to less cruelty to cows.

And the truth is vegan alternatives to dairy are not only just as good as the products we grew up with, they’re better. Yes, even cheese. Plant-based milks are taking over the dairy case at the supermarket and are no longer just made from just soy. Today there is everything from almond to coconut to hemp to flax milk. Additionally, margarine and vegan butters are widely available. And ice cream? Please. All the major ice cream brands like Breyer’s, Ben & Jerry’s, and Häagen-Dazs all do vegan versions.

Each of us has the power to speak out against cruelty and stand up for mothers every time we sit down to a meal. It’s all about supply and demand. If people don’t buy dairy, retailers won’t sell it, and farmers won’t make it.

A few years back, Elmhurst – a 90-year dairy company – decided to close its doors and reopen as a plant-based milk company. They upgraded their business to fit with the ethics of today. If they can do it, so can you.